Quidditch is a co-ed sport that merges elements of rugby, dodgeball, and handball into a new challenging sport. The sport was created in 2005 in the United States and is being played by almost a thousand teams all over the world. There are national competitions (Dutch Quidditch Cup, Dutch Quidditch League) and international competitions (European Games, European Quidditch Cup, World Cup). By combining several game elements quidditch becomes a tactical, fast-paced, and physical sport.

A quidditch team consists of 7 players, who always have to keep a broom (PVC-tube) between their legs. They play on a field with 3 hoops on each side. Both teams have 3 chasers, who try to get a quaffle (a slightly deflated volleyball) through the opponent’s hoops. This scores their team 10 points. Both teams also have a keeper that tries to stop the opponent’s chasers from scoring. Besides that, both teams also have 2 beaters. The beaters play with 3 bludgers (dodgeballs) and with these they can temporarily knock opponents out their opponents to interrupt their game. When a player is hit by a bludger they must run back to their own hoops and tag them before resuming play.
Both teams also have a seeker. The only goal of the seeker is to catch the snitch. The snitch is a tennis ball that is inside a piece of cloth attached with velcro to the pants of a neutral player (called the snitchrunner). When the snitch is caught, the team gets 30 points and the game has ended.

Because quidditch is co-ed, there are rules about the gender of the players. Every team can have a maximum of 4 players of the same gender on the field at the same time. Non-binary gender identities are considered separately by this rule. The quidditch community is actively working towards being inclusive for players from all backgrounds and gender identities.

Use the link below to go to our Sponsorkliks page. Sponsor us for free with every purchase at an affiliated webshop!

Oude Horstlindeweg
Next to the hockey field on campus. 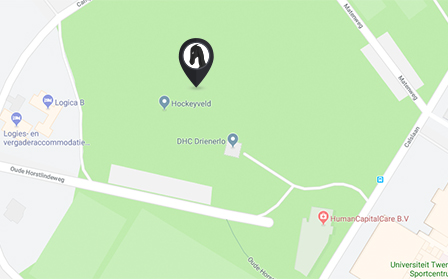